For the past several weeks, I've been trying to fix a cranky spec in Karafka integrations suite, which in the end, lead me to become a Ruby on Rails micro-contributor and submitting similar fix to several other high-popularity projects from the Ruby ecosystem. Here's my story of trying to make sense of my specs and Ruby concurrency.

Ephemeral bug from a test-suite

Karafka is a Ruby and Rails multi-threaded efficient Kafka processing framework. To provide reliable OSS that is multi-threaded, I had to have the option to run my test suite concurrently to simulate how Karafka operates. Since it was a specific use case, I created my micro-framework.

Long story short: It runs end-to-end integration specs by running them in separate Ruby processes. Each starts Karafka, runs all the code in various configurations, connects to Kafka, checks assertions, and at the end, shuts down. 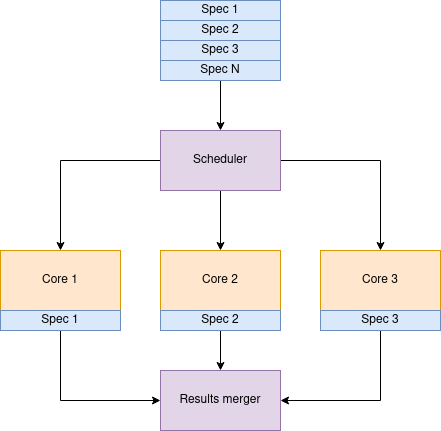 Such an approach allowed me to ensure that the process's whole lifecycle and its components work as expected. Specs are started with supervision, so in case of any hang, it will be killed after 5 minutes.

Karafka itself also has an internal shutdown supervisor. In case of a user shutdown request, if the shutdown takes longer than the defined expected time, Karafka will stop despite having things running. And this is what was happening with this single spec:

This damn spec did not want to stop!

Many things are working under the hood:

One thing that certainly worked was the process supervision that would forcefully kill it after 30 seconds.

The graceful shutdown of such a process takes work. When you have many connections to Kafka, upon a poorly organized shutdown, you may trigger several rebalances that may cause short-lived topics assignments causing nothing except friction and potentially blocking the whole process.

To mitigate this, Karafka shuts down actively and gracefully. That is, until the absolute end, it claims the ownership of given topics and partitions, actively waiting for all the current work to be finished. This looks more or less like so: 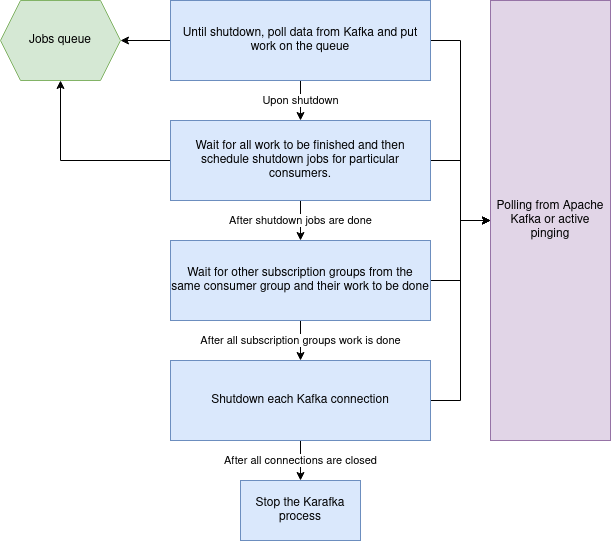 After several failed attempts and fixing other bugs, I added a lot of extra instrumentation to check what Karafka hangs on. It was hanging because there were hanging listener threads!

As stated above, to close Karafka gracefully, all work from the jobs queue needs to be finished, and listeners that poll data from Kafka need to be able to exit the polling loops. It's all coordinated using a job queue. The job queue we're using is pretty complex with some blocking capabilities, and you can read about it here, but the interesting part of the code can be reduced to this:

Those queues are used as semaphores in the polling loops until all the current work is done. Since each Queue is assigned to a different subscription group within its thread and hidden behind a concurrent map, there should be no problem. Right? 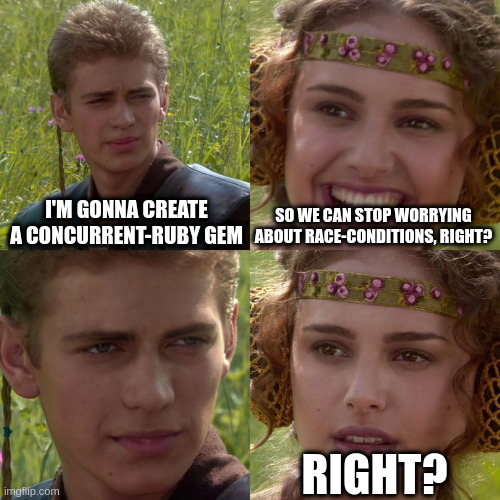 Once I had my crazy suspicion, I decided to reduce it down to a proof of concept:

There is more than one semaphore for one listener! This caused Karafka to wait until forced to stop because the worker thread would use a different semaphore than the listener thread.

But how is that even possible?

Well, Concurrent::Hash and Concurrent::Map initialization is indeed thread-safe but not precisely as you would expect them to be. The docs state that:

This version locks against the object itself for every method call, ensuring only one thread can be reading or writing at a time. This includes iteration methods like #each, which takes the lock repeatedly when reading an item.

"only one thread can be reading or writing at a time". However, we are doing both at different times. Our code:

is actually equivalent to:

and the block content is not locked fully. One threads queue can overwrite the other if the Ruby scheduler stops the execution in the middle. Here's the flow of things happening in the form of a diagram: 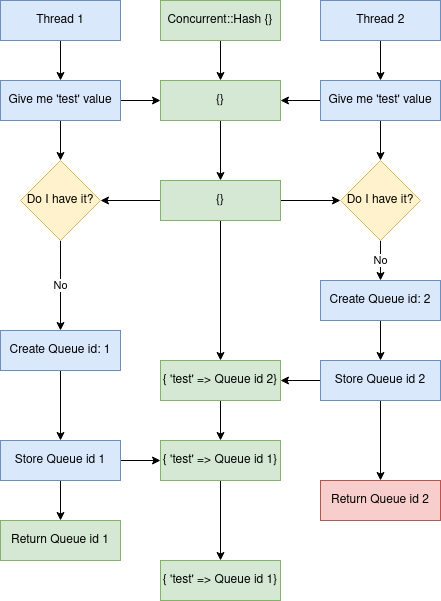 Once in a while listener would receive a dangling queue object, effectively blocking the polling process. 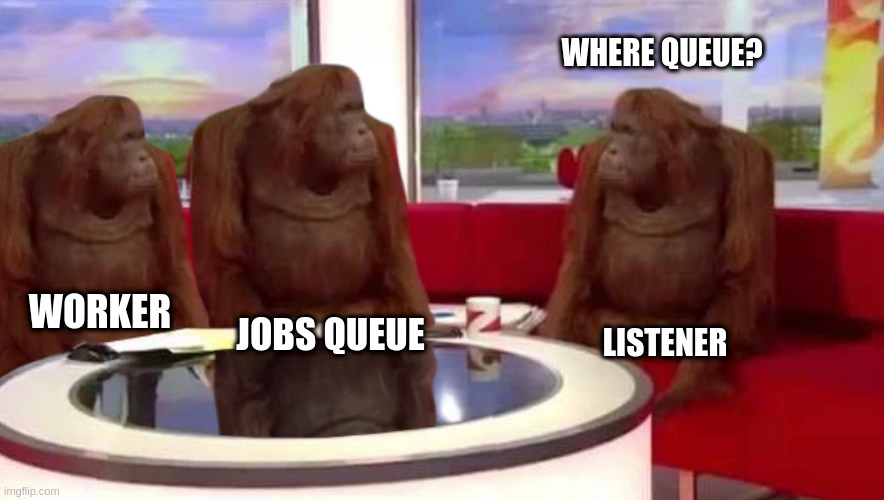 Okay, but what does Ruby on Rails and other projects do with all of this?

I figured out that if I made this mistake, maybe others did. I decided to check my local gems to find occurrences quickly. Inside my local gem cache, I executed the following code:

and validated that I'm not an isolated case. I wasn't alone!

Then using Sourcegraph I pinpointed a few projects that had the potential for fixes:

I am not a domain expert in any of those, and understanding the severity of each was beyond my time constraints, but I decided to give it a shot.

Within Rails, this "pattern" was used twice: in ActiveSupport and ActionView.

In ActionView, it was used within a cache:

and assuming that the cached result is stateless (same result each time for the same key), the issue could only cause an extra computation upon first parallel requests to this cache.

In the case of ActiveSupport, none of the concurrency code was needed, so I just replaced it with a simple Hash.

Both, luckily, were not that severe, though worth fixing nonetheless.

Both were merged, and this is how I became a Ruby on Rails contributor :)

This case was slightly more interesting because the concurrent cache stores all translations. In theory, this could cause similar leakage as in Karafka, effectively losing a language by loading it to a different Concurrent::Hash:

This could lead to hard-to-debug problems. Once in a while, your system could raise something like this:

without an apparent reason, and this problem would go away after a restart.

Another cache case where the risk would revolve around double-computing.

This one is interesting! Let's reduce the code to a smaller POC first and see what will happen under heavy threading:

The counter value gets biased. What is even more interesting is that making the map safe won't be enough:

there is one more "unsafe" method:

this operation also is not atomic, thus needs to be wrapped with a mutex:

Only then is this code safe to be used.

In my opinion, there are a few outcomes of this story:

On the other hand, looking at the frequency of this issue, it may be worth opening a discussion about changing this behavior and making the initialization fully locked.

Concurrent::Hash under cRuby is just a Hash. You can check it out here.