Recently I’ve been working with one small application that would gradually become slower and slower. While there were many reasons for it to happen, I found one of them interesting.

To give you a bit of context: the application was a simple single topic legacy Kafka consumer. I rewrote it to Karafka, and all of the logic looks like this:

And the processor looks like so (I removed all the irrelevant code):

So, we have a Karafka consumer with a processor with one background thread supposed to flush the data async. Nothing special, and when putting aside potential thread crashes, all looks good.

However, there is a hidden problem in this code that can reveal itself by slowly degrading this consumer performance over time.

If that was all, I would say it's not that bad. While for a single topic consuming process, with 20 partitions, we do end up with additional 20 threads, upon reaching this number, the degradation should stop.

There is one more case where our legacy consumer and Karafka would spin-up additional threads because of the processor re-creation: Kafka rebalance. When rebalancing happens, new consumer instances are initialized. That means that each time scaling occurred, whether it would add or remove instances, a new processor thread would be created.

Fixing this issue without a re-design is rather simple. As long as we can live with a singleton and we know that our code won't be executed by several threads in parallel, we can just make the processor into a singleton:

While it is not the optimal solution, in my case it was sufficient.

One question remains: what was the performance impact of having stale threads that were doing nothing?

I'll try to answer that with a more straightforward case than mine:

I've run this code 100 times and used the average time to minimize the randomness impact of other tasks running on this machine. 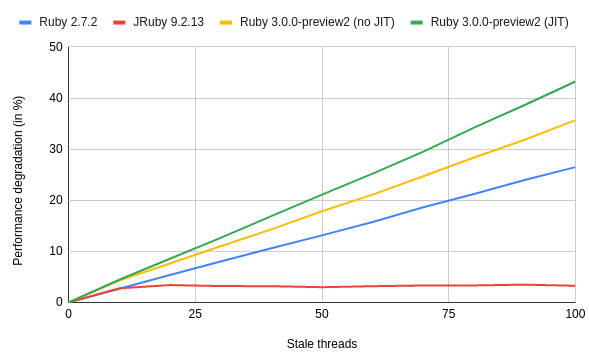 CRuby performance degradation is more or less linear. The more threads you have that do nothing, the slower the overall processing happens. This does not affect JRuby as JVM threads support is entirely different than the CRubys.

What worries me more, though, is that Ruby 3.0 seems to degrade more than 2.7.2. My wild guess here is that it's because of Ractors code's overhead and other changes that impact threads scheduler.

Below you can find the time comparison for all the variants of CRuby: 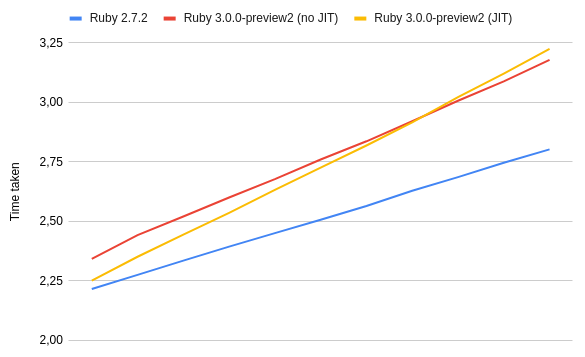 It is fascinating that 3.0 is slower than 2.7.2 in this case, and I will try to look into the reasons behind it in the upcoming months.

Note: I do not believe it's the best use-case for JIT, so please do not make strong claims about its performance based on the charts above.

The more complex applications you build, the bigger chances are that you will have to have threads at some point. If that happens, please be mindful of their impact on your applications' overall performance.